A Multiverse Analysis of Interaction Effects

In recent years, there is a growing interest in multiverse analysis, a technique for compiling all possible datasets that could result from different data processing decisions. Once compiled, researchers can run their analysis of interest across all datasets in the multiverse to see how sensitive their models are to the decisions that produced the underlying data. In this post, I attempt my own multiverse analysis using simulated data.

Note that there are already many good places to learn more about the multiverse analysis, including papers, blog posts, and code examples. My intention is to understand the mechanics of the technique without the aid of a pre-written package. My goal is to deepen my own understanding and to flesh out the different ways to use the technique and compile/visualize the results.

Processing raw data involves many steps, such as cleaning, preparing, and creating analysis variables (among many others). Such decisions eventually produce an analysis-ready dataset, but making (even slightly) different decisions will produce a different dataset. And so emerges the multiverse: all possible datasets that could be generated from different data processing decisions (see also the garden of forking paths).

For example, whether to remove outliers at +/- 3 or 2.5 standard deviations could be arbitrary. Neither cutoff is theoretically informed and both are equally defensible.

Multiverse analysis should be ran over all possible arbitrary decisions. This is important because the multiverse can quickly become unnecessarily large and difficult to interpret. Ideally, the multiverse will comprise all datasets that, by themselves, would make sense to analyze and interpret individually.

To conduct my multiverse analysis, I will be using a number of packages from the tidyverse. Below are the specific packages I used for my setup:

Exclusion variables are also included in the data.

These variables will be used to construct a multiverse of datasets.

And here are the first 10 rows of the simulated data:

The first step in conducting creating a multiverse is to construct a grid of data-filtering and/or processing decisions. The function expand_grid() creates all possible combinations of these decisions. My decisions are as follows:

The above grid contains 432 different data processing steps, which means our grid will produce a multiverse of 432 datasets. Note that each row contains character strings of the actual code that will be evaluated later to filter the raw data.

For plotting, I also created a grid key with nice names for each decision and for the variables they involve.

After creating the decision grid, I can place the filtering instructions inside a loop to iterate over all possible decision combinations. At the end of each iteration, I save a list of the data, sample size, and the specific decisions that produced the data. The result of this loop will be a single, large list of 432 elements.

Here is an example an element in this list:

One issue that could arise in multiverse analysis is that the sample sizes of some individual datasets may be very small, at least compared to the full dataset. If this occurs, it may not make sense to analyze the datasets with small sample sizes. To check this issue, I can plot the distribution of sample sizes as a function of the decisions in our decision grid: 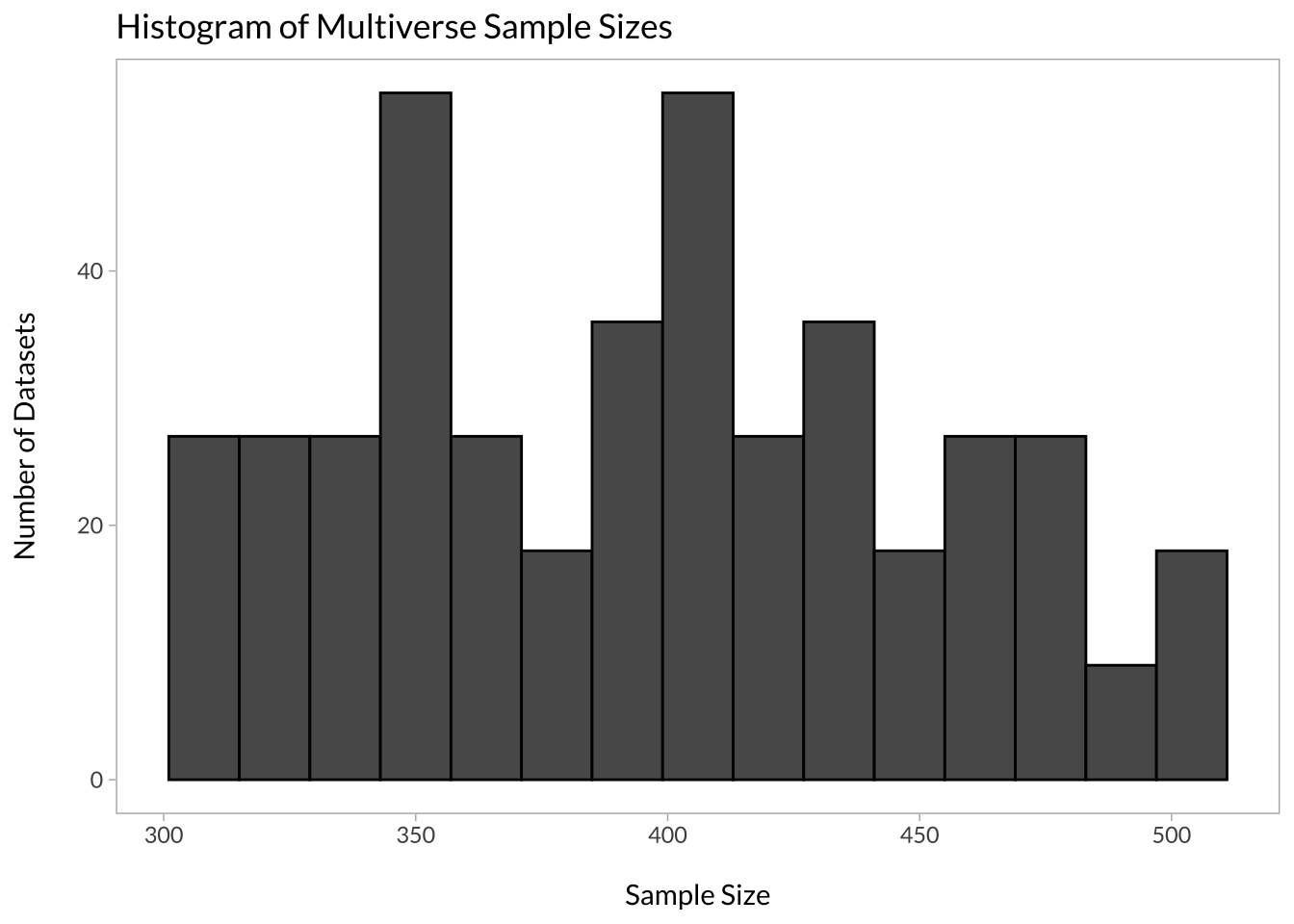 In my case, the minimum sample size was 304 and the maximum was 500. We can also look at which data processing decisions affected sample size the most: 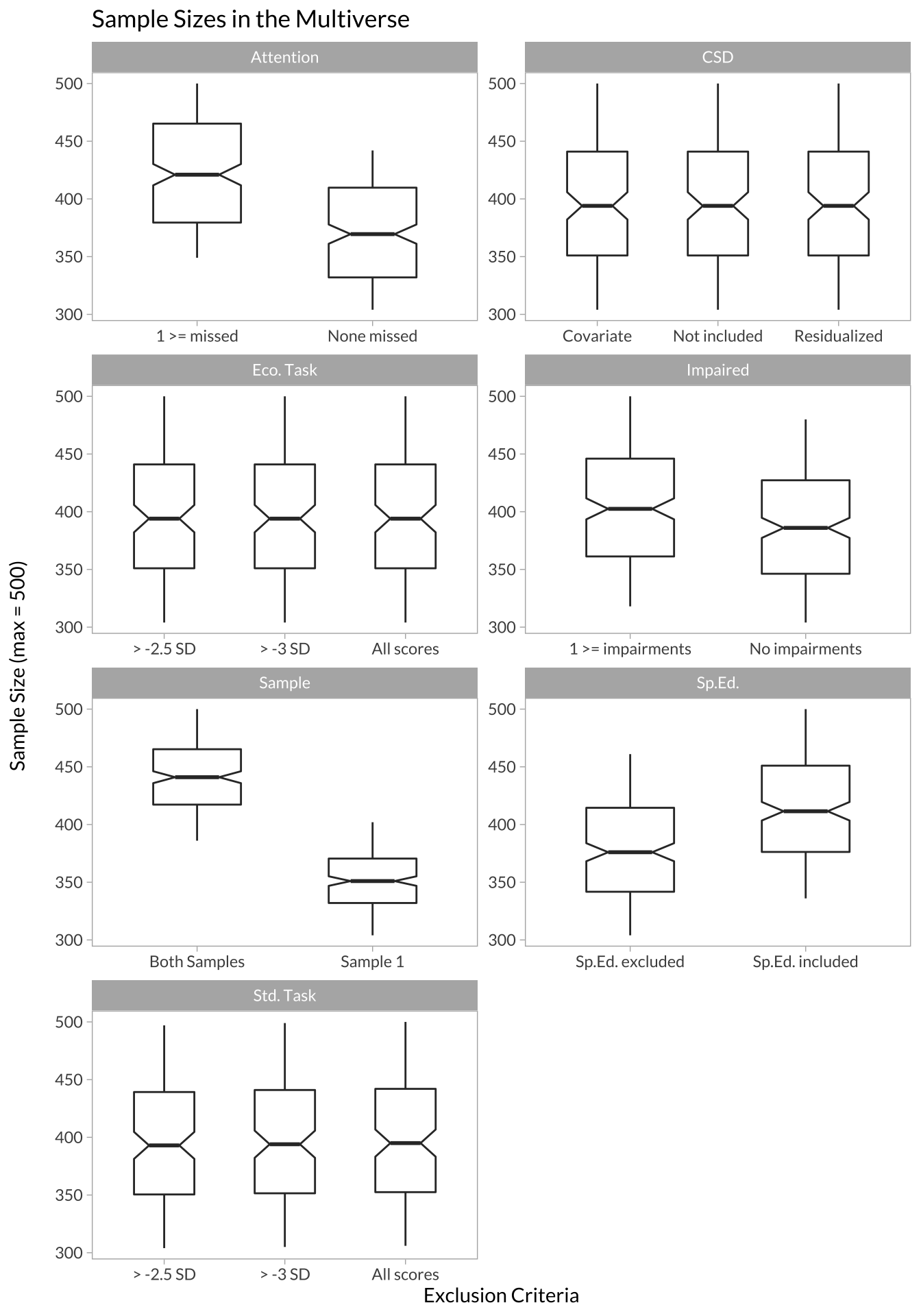 I’ve generated our multiverse of datasets, now I need to analyze it. My strategy is to loop over my multiverse_data object. First, I extract the decisions that produced the data to know what we should do with ex_csd (i.e., create residualized scores, include it as a covariate, or do nothing).

Next, I restructure the data into long format so I can run a mixed model with random intercepts to look at the main effect of iv_unp (between-subjects), main effect of task_type (standard or ecological version, within-subjects), and their interaction.

After running the mixed model, I also do a simple slopes test to evaluate (in the context of an interaction) the simple effects of high versus low unpredictability and standard versus ecological versions of the test.

At the end of each iteration, I compile another list with the following components:

Another way to evaluate the results is to create histograms of the p-values for each effect. If the p-values of a particular effect tend to cluster around the set alpha level (usually p < .05), the model is relatively robust to the (arbitrary) data processing decisions. If the distribution looks more uniform, the model is more sensitive to these decisions.

Lastly, because I am primary interested in interactions, I want to plot the form of each interaction obtained. I can do that by plotting predicted estimates based on high and low unpredictability and task-type for every model, coloring lines based on the significance of the interaction term. 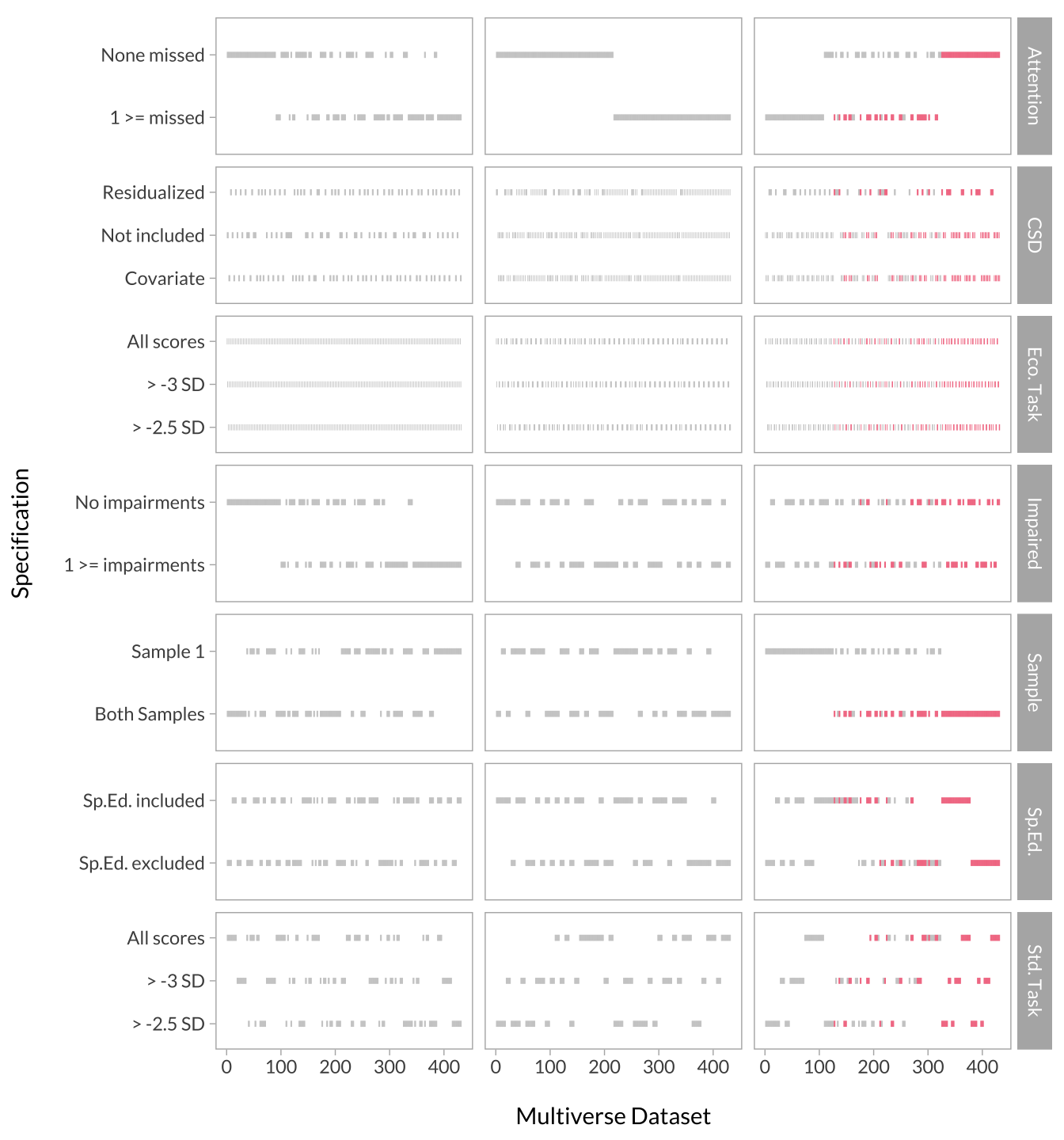 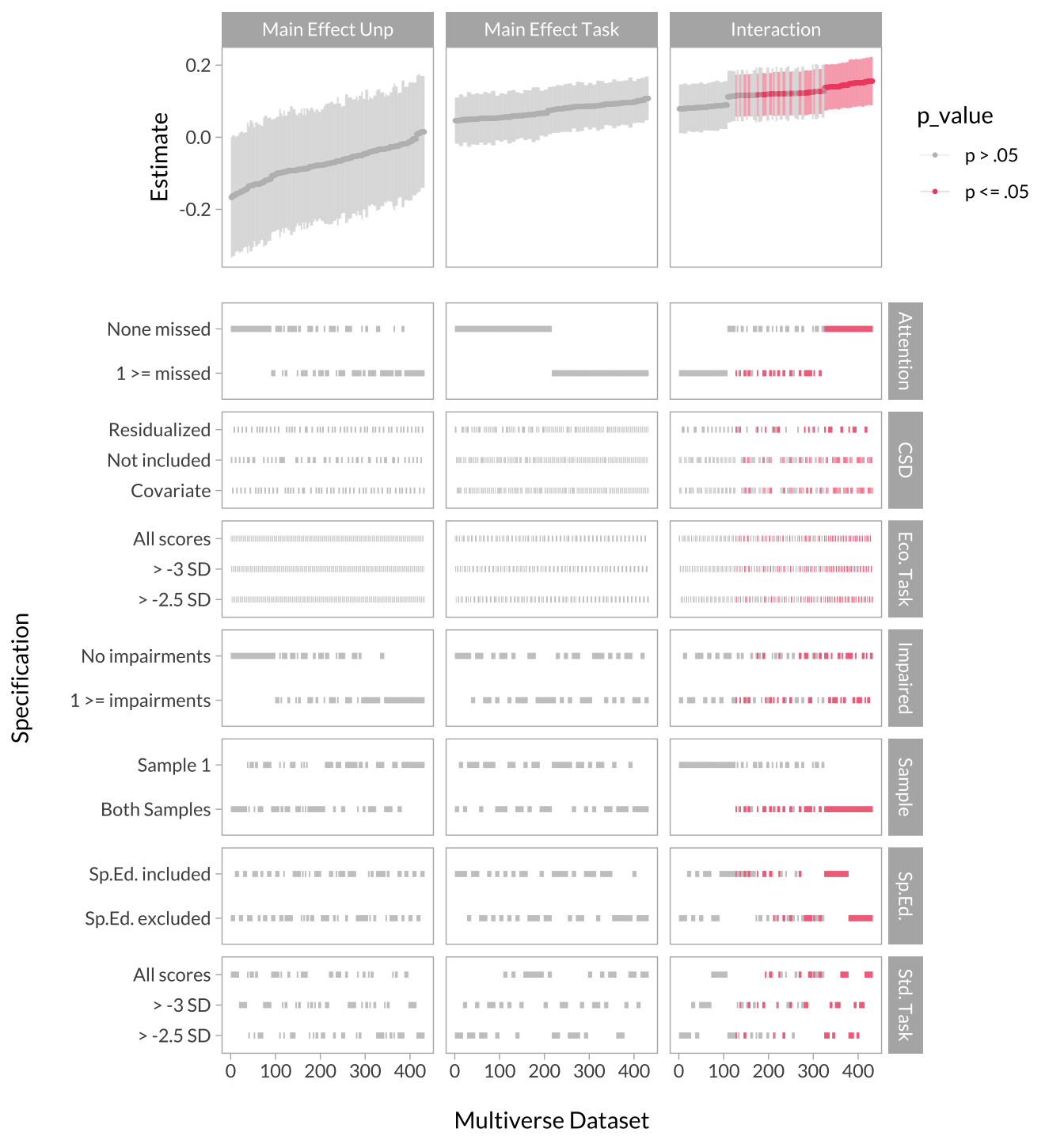 The Histogram of p-values

The code below grabs this information from our multiverse analysis so I can visualize these effects. Note that I could also make a specification grid for each of these plots but I opted not to for brevity.

This plot shows the effect of task type when unpredictability is low versus high. 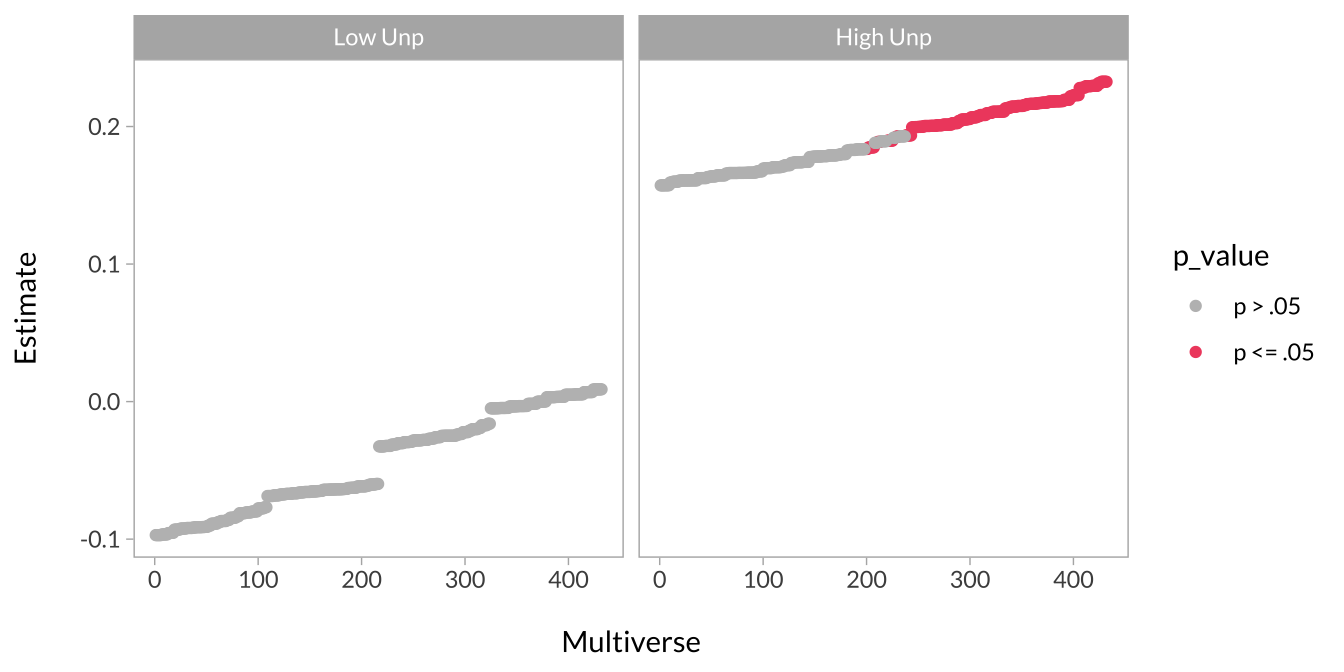 This plot shows the effect of unpredictability when task type is the standard versus ecological version. 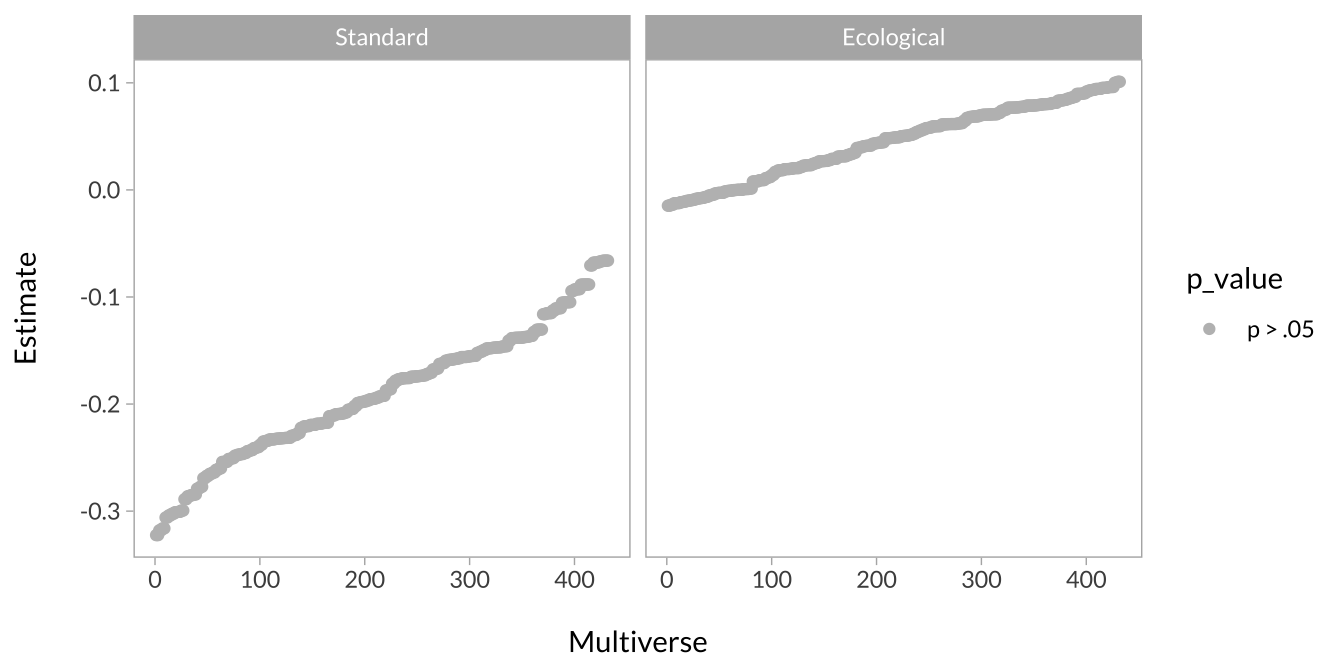 Each line represents an interaction from a single dataset in the multiverse. I’ve broken the plots out into panels so the overall pattern is more visible. I’ve also made one plot with unpredictability on the x-axis and separate panels for task type. I made another plot with these flipped.

Effect of Unpredictability Across Task Type 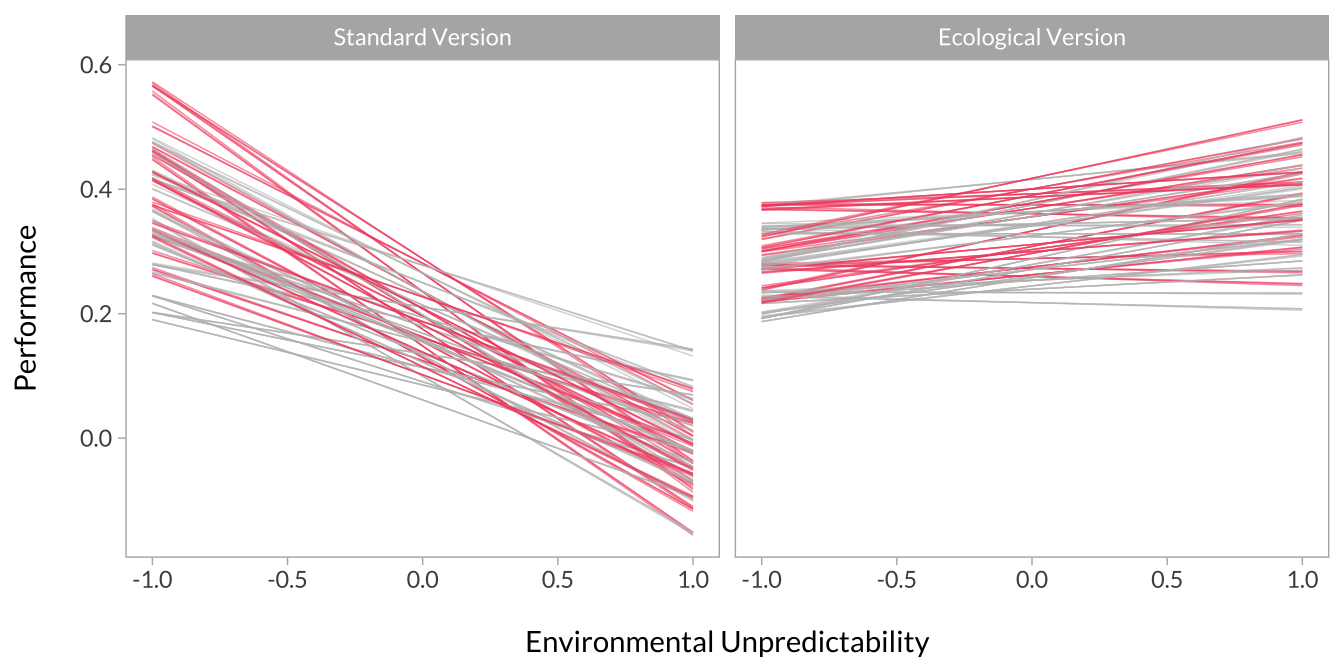 Effect of Task Type Across Unpredictability 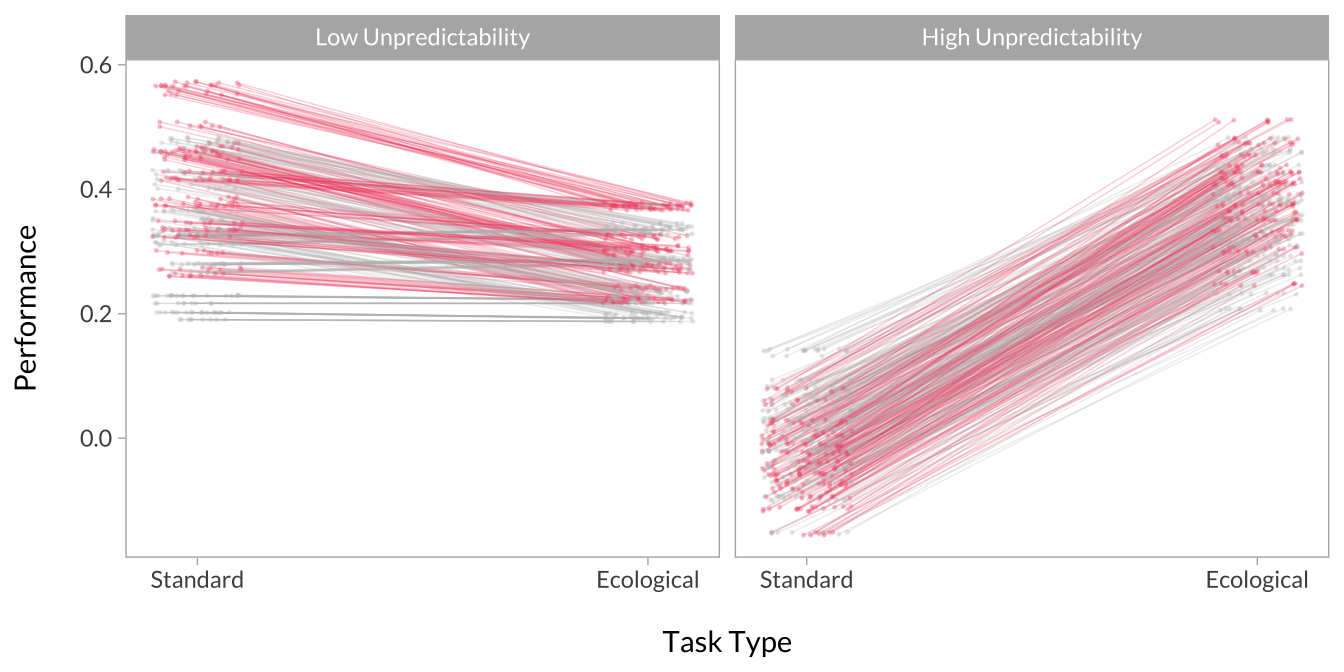 And that’s it! My first foray into multiverse style analysis.